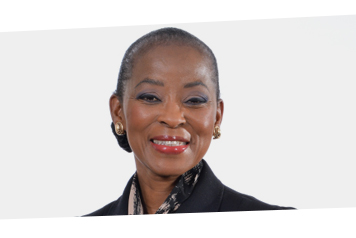 Dolly Mokgatle is a Non-Executive Director of IQbusiness. She is also an Executive Director and Co-Founder of Peotona Group Holdings – a women-owned and -managed company that uses two thirds of its profit to fund education and enterprise development in the communities where it operates.

Before joining IQbusiness, Dolly served as Chief Executive Officer of Spoornet. Prior to that, she was Managing Director of the Transmission Group in Eskom, where she was the first black person, first woman, and first non-technical individual to be appointed to the position. In 2005, she was involved in National Energy Regulation in South Africa (NERSA) as Deputy Chairman of the Board and Chairman of the Electricity Committee – a position she held until 2009. Before joining Eskom, she was Litigation Officer of the Black Lawyers Association Legal Education Centre, where she focused mainly on political cases, housing, labour, and other human rights violation matters.

Dolly also worked for the University of the Witwatersrand as a Research Officer with the Centre for Applied Legal Studies, as well as a Professional Assistant at the Public Interest Law Firm, Cheadle, Thompson and Haysom. Her qualifications include a B.Proc, LLB (Law), and a Higher Diploma in Tax Law. Finally, she is a (non-practicing) attorney of the High Court of South Africa.